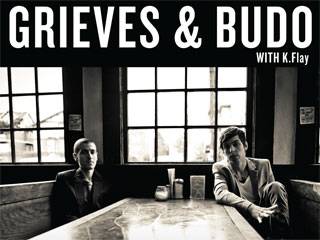 On The Rocks Tour with Grieves & Budo w/ K. Flay & The Breaklites

Doors open at 9:00PM
Share this event with friends!
Having spent nearly two years on the road touring in support of 88 Keys and Counting, Grieves found himself returning home to a fractured reality. Reeling from turbulence in his career and heartbreak in his personal life mixed with coming down from the high of the support he received on the road Grieves conceptualized Together/Apart, an album that would address the bond music creates between each of us as individuals and as a whole despite the many distances we experience be they geographical or emotional. The end of 2008 saw Grieves enlisting the help of friend and collaborator Budo to co-produce Together/Apart bringing his signature swiss-army knife, multi-instrumental backdrop to Grieves' hauntingly poignant narrative. The album began taking shape in New York as the two built off the success 88 Keys and Counting had generated and paired it with the intensity they developed from their live performances. The recording process began to shadow the theme of the album as it saw tracks recorded in Colorado and Washington in addition to New York, infusing it with a mixture of regional influences while still maintaining a cohesive sound. As the album neared completion the title took on a double meaning for Grieves as he explored new subject matter in the absence of trust, refuge in addiction, acceptance and honesty in self-reflection, and trying to find his place in the world without forgetting his roots. Together/Apart concludes three years of self-discovery that has ultimately lead to Grieves' most emotionally charged and daring album to date. Come together, grow apart June 21st, 2011. http://www.rhymesayers.com/grieves http://www.facebook.com/grievesmusic http://www.twitter.com/grievesmusic
You must be signed in to add this to your order. Sign in here or create a new account.