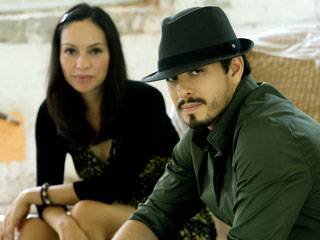 Doors open at 7:00PM
Share this event with friends!
NEW STUDIO ALBUM AREA 52 OUT JANUARY 24TH ON ATO RECORDS CONFIRMED FOR 38TH SEASON OF "AUSTIN CITY LIMITS" ATO Records is excited to announce Rodrigo y Gabriela's spring 2012 tour dates in support of their soon to be released album Area 52 (January 24th). Area 52 contains nine of Rod and Gab's favorite songs from their own catalogue re-arranged and recorded in Havana with legendary producer Peter Asher and a 13-piece Cuban orchestra comprised of some of the country's finest young players. This spring, Rodrigo y Gabriela will be bringing the band C.U.B.A. on the road in order to showcase the thrilling and dynamic hybrid of metal, latin and jazz featured on the album in a live setting. It will mark the first time in their careers that Rodrigo y Gabriela have toured and performed with a backing band. In addition to the coming tour, Rodrigo y Gabriela were recently confirmed to perform on the upcoming 38th season of the long running tv series Austin City Limits. Watch the trailer for Area 52 http://www.youtube.com/watch?v=LBBM-02joFU&feature=youtu.be Listen to "Juan Loco" from Area 52 on SoundCloud http://soundcloud.com/ato_records/rodrigo-y-gabriela-juan-loco Area 52 was mixed by Rafa Sardina, one of the leading studio musicians in the Latin music world, and arranged by London-based pianist, composer and arranger Alex Wilson. Recording took place in the Miramar district of Havana, Cuba, at Abdala Studios, founded by the Cuban folk hero Silvio Rodriguez, as well as at Rod and Gab's studio in Ixtapa, Mexico. Other players on the record include: drummer John Tempesta (The Cult, Testament, White Zombie), sitarist Anoushka Shankar and drummer Samuel Formell (Los Van Van). Area 52 Album Pre-Order: http://rodgab.com/store_us.html "The resulting album is a grand collection of instrumental Latin numbers that veer drastically in style and tone." -Relix Magazine www.rodgab.com www.npr.org/2012/01/15/144962952/first-listen-rodrigo-y-gabriela-area-52
You must be signed in to add this to your order. Sign in here or create a new account.